·Designed the digital and analog circuit for the Smart Car Model by Protel DXP
·Have published one paper named"Hardware System Design forIntellectual Model Car based on MC9S12X128", Second International Conference of Computer and Management.

This project aims at designing a Smart Model Car(SMC). By camera’s identification of the path, we shall make the SMC run steadily at an intended orbit. The shorter the SMC costs the time, the better the car’s performance, and so as the grades.

Due to the idea of the hardware related to the project is a little creative, I wrote a meeting paper after the game. At this time it has been integrated into essay collection and waits to be searched. 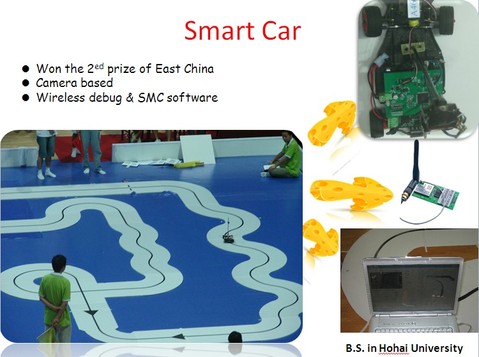 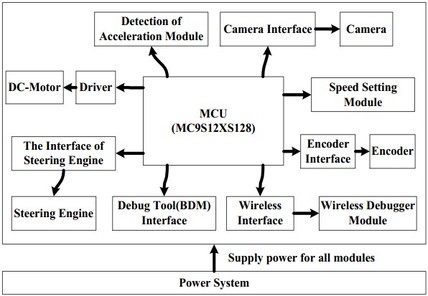 Structure of Hardware System
This project covers hardware circuit design, Camera image acquisition compression algorithm,Wireless communication(nF905，used for debugging), mechanical design. Because of my participation in the past two game before, I grasp the knowledge relevant to the SMC.
The hardware design of the SMC system is as the picture one, in which the control center of the whole system is MCU ( MC9S12X128). It acquits orbital data by camera, and deals the data using filtering algorithm. MCU sends a signal, and by actuating to control steering gear and dc motor rotation respectively, it controls SMC’s movement direction and dc motor’s velocity. As a result, SMC are able to run steadily as well as quickly. 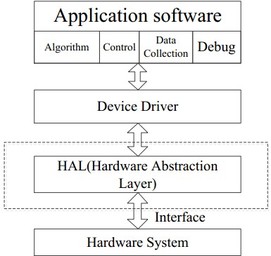 Detail of Hardware-Software Interface
As for the interface of Software and hardware, though the software system is not OS, I designed it modeling the framework of Linux, increasing the independence of the two parts and making them not interfere with each other.

As the SMC competition is developing, more new technologies and IC will appear and the old one should be updated. However, if interfaces of hardware correspond to interfaces of devices driver, it will improve portability of the SMC’s design and greatly reduce the workload when changing program.

In detail, modules of the hardware system are independent and the design abstract hardware interfaces into driver layer, then distribute each interface unique ID, which is convenient for the modules to be managed. Detailed design is shown in Figure 10. In the figure, the structure of HAL shown in box is fixed and it can express content of both hardware and device driver. Generally, when hardware and application software need to be modified, the HAL only need to change some characters.

The reason why I participate in the project is to attend the "Freescale cup" National College Students Smart Car competition, jointly organized by the ministry of education and the Freescale. I took part in the third and fourth competition, and each time I got second prize of East China(5%).